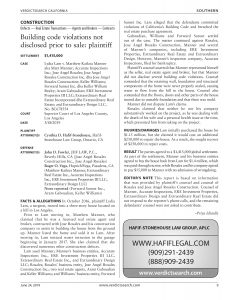 In October 2016, plaintiff Lydia Lam, a surgeon, moved into a three-story house located on a hill in Los Angeles. Prior to Lam moving in, Matthew Manner, who claimed that he was a licensed real estate agent and broker, contracted with Jose Rosales and his construction company to assist in building the house from the ground up. Manner listed the home and sold it to Lam. After moving in, Lam noticed water intrusion in the garage beginning in January 2017. She also claimed that she discovered numerous other construction defects. The parties agreed to a $1,415,000 global settlement. As part of the settlement, Manner and his business entities agreed to buy the house back from Lam for $1.4 million. 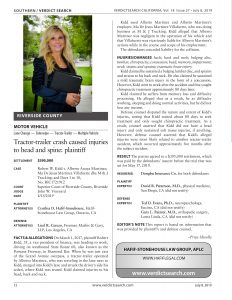 On March 1, 2017, plaintiff Robert Kidd, 55, a vice president of finance, was heading to work, driving on westbound State Route 60, also known as the Pomona Freeway, in Diamond Bar. When he was just east of the Grand Avenue overpass, a tractor-trailer operated by Alberto Martinez, who was traveling in the lane next to Kidd, merged into Kidd’s lane and struck the driver’s side his sedan, where Kidd was seated. Kidd claimed injuries to his head, back and neck. The parties agreed to a $395,000 settlement. 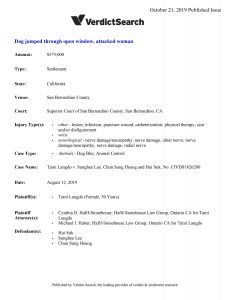 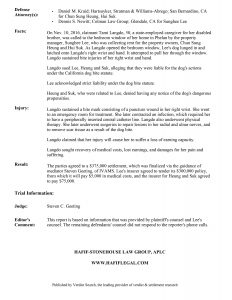 On Nov. 10, 2016, claimant Tami Langdo, 50, a state-employed caregiver for her disabled brother, was called to the bedroom window of her home in Phelan by the property manager, Sunghee Lee, who was collecting rent for the property owners, Chun Sung Heung and Hui Suk. As Langdo opened the bedroom window, Lee’s dog lunged in and latched onto Langdo’s right wrist and hand. It attempted to pull her through the window. Langdo sustained bite injuries of her right wrist and hand. The parties agreed to a $375,000 settlement. 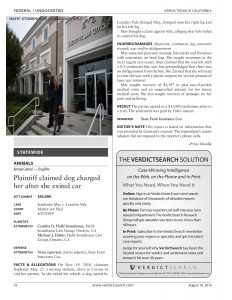 On Nov. 19, 2018, claimant Stephanie May, 27, a nursing student, drove to Corona to visit her parents. As she exited her vehicle, a dog owned by Leandro Vale charged May, clamped onto her right leg and bit her left leg. May brought a claim against Vale, alleging that Vale failed to control his dog. May sought recovery of $1,197 in past out-of-pocket medical costs and an unspecified amount for her future medical costs. She also sought recovery of damages for her pain and suffering. The parties agreed to a $53,000 settlement prior to a trial. The settlement was paid by Vale’s insurer. 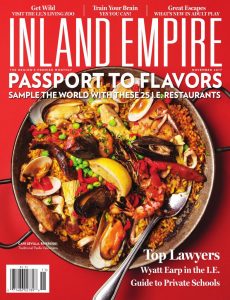 INLAND EMPIRE MAGAZINE not only listed CYNTHIA HAFIF-STONEHOUSE among the “Top Lawyers” but selected her among 10 others for a special recognition interview. 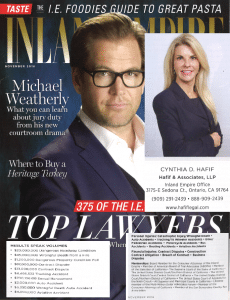 INLAND EMPIRE MAGAZINE names Cynthia D. Hafif as one of its top lawyers in the November 2016 issue. 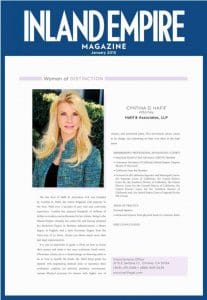 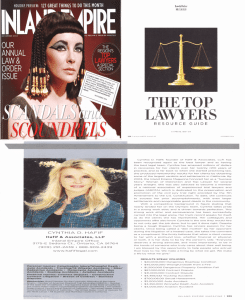 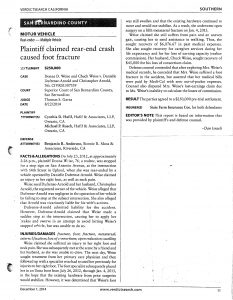 Cynthia’s client obtained a foot fracture injury after she was rear-ended by a vehicle. Her client sued the defendant, alleging that they were negligent in the operation of their vehicle by failing to stop at the intersection. 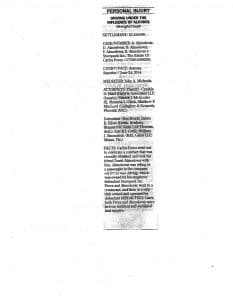 Carlos Perez went out to celebrate a contract that was recently obtained and took his friend with him. Later, both Perez and Almodovar were in a car accident and sustained fatal injuries. 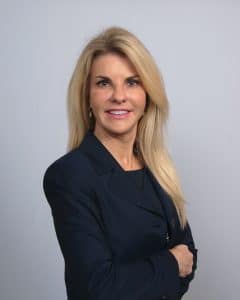 2014 - VOTED IN AS MEMBER OF AMERICAN BOARD OF TRIAL ASSOCIATES

“The preservation of the civil jury trial, “Justice by the People,” is the primary purpose of the American Board of Trial Advocates (ABOTA).”

We seek attorneys who display skill, civility and integrity, to help younger attorneys achieve a higher level of trial advocacy and to educate the public about the vital importance of the Seventh Amendment. Thomas Jefferson was of the opinion that the right to trial by a jury of fellow citizens was a more important safeguard of personal liberty than the right to vote. With a jury, the rights and duties of each of us will be decided by our fellow citizens, not by some bureaucrat or governmental functionary. ABOTA agrees with Jefferson and is a leader in the fight to preserve and protect your right to a jury trial. ABOTA is dedicated to “Justice by the People.” 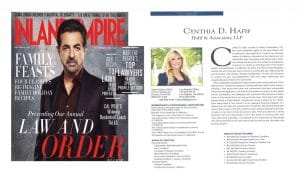 “Cynthia Hafif may not look like a trial lawyer but beware, looks can be deceiving. Already amassing millions of dollars in verdicts and settlements for her clients over her brief 12-year career, she has earned a reputation as one of the most feared lawyers in the Inland Empire.”

2010 - NAMED TO BOARD OF CONSUMER ATTORNEYS OF THE INLAND EMPIRE

Cynthia Hafif of Hafif & Associates, LLP joined the Board of Directors of CAOCIE and was recently honored as a speaker by the state of California at the seminar that the CAOC is hosting in Rancho Mirage on May 10, 2010. Read more here. 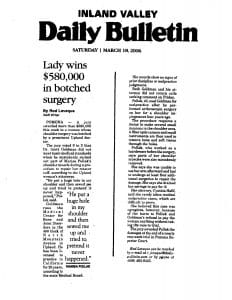 Cynthia Hafif won her client over $580,000 in a jury verdict after successfully arguing that her client’s doctor did not meet basic medical standards when he mistakenly sucked out part of the patient’s shoulder muscle during a procedure.

In February 2000, plaintiff was driving his BMW east on Santa Monica freeway. Upon encountering some pooling water, he lost control of his car and skidded off the road into a highway barrier, rendering him a quadriplegic. 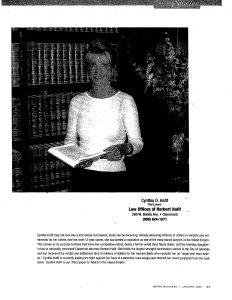 Already amassing millions of dollars in verdicts and settlements for her clients, she has earned a reputation as one of the most feared lawyers in the Inland Empire. She holds the largest wrongful termination verdict in the City of Glendale and has recovered by verdict and settlement tens of millions of dollars for her injured clients who consider her an “angel sent from heaven.”

Attorney Cynthia Hafif gets her client $1,200,000 from a jury verdict after they fell from a second floor apartment balcony, breaking both elbows after a railing gave way. 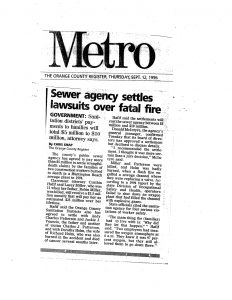 The county’s public sewer agency has agreed to pay more than $5 million to settle wrongful death claims by the families of two construction workers burned to death in a Huntington Beach sewage plant. 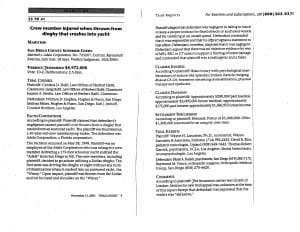 2000 - JURY AWARDS $5,972,000 verdict to crew member injured when thrown from dinghy that crashed into a yacht

The client suffered brain injury with psychological manifestations of seizure-like episodes, broken clavicle, bulging disks at C5-C6, treatment consisting of rehabilitation, physical therapy and epidural after they were injured when thrown from a dinghy that crashed into a yacht.

1999 - Cynthia hafif gets her client $1.725 million for construction site accident

Cynthia’s client, a painter, fell from an unsecured scaffold and obtained skull fracture with memory loss. 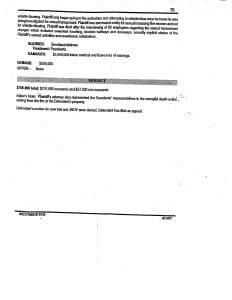 The Plaintiff in this case was terminated due to whistle blowing the facts regarding the cause of a deadly fire. Cynthia took the case to court and won, arguing they were terminated in violation of public policy for whistle blowing. 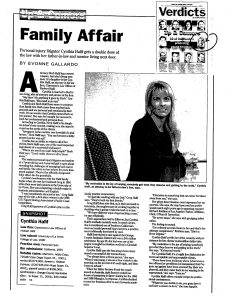 UP & COMERS: A FAMILY AFFAIR

Personal injury litigator Cynthia Hafif gets a double dose of the law with her father-in-law and mentor living next door. 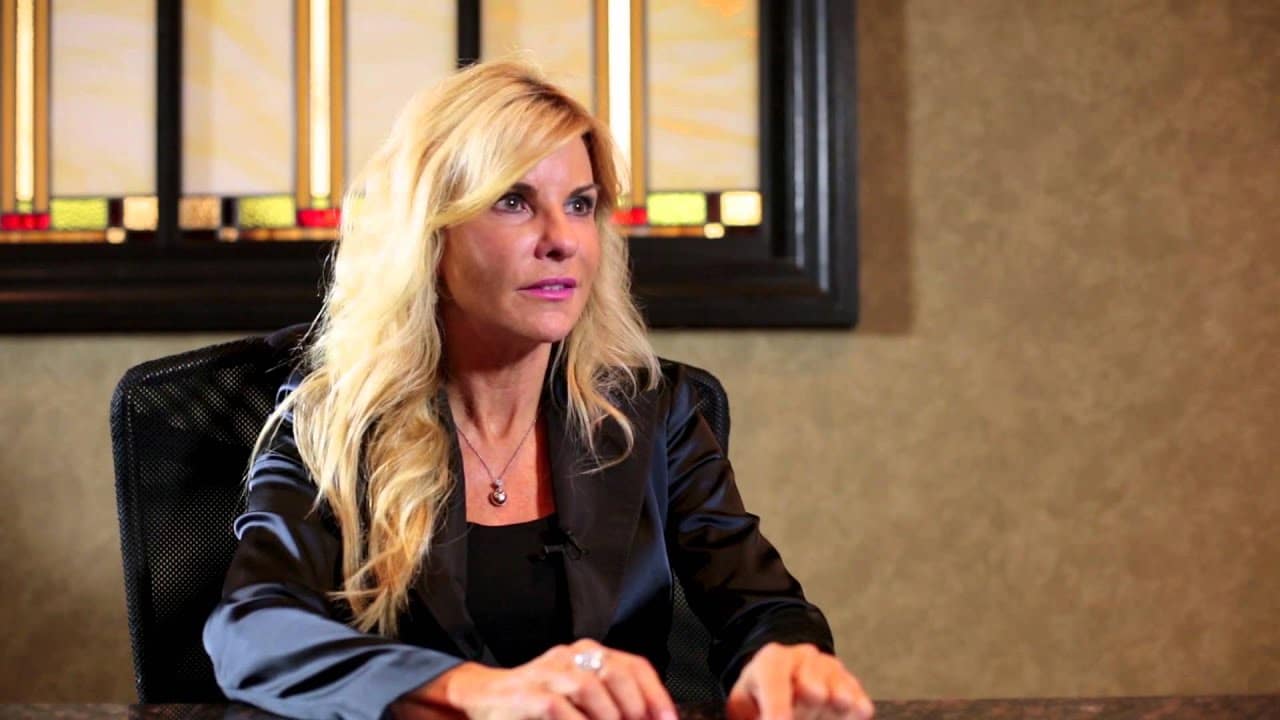 HONORED BY UNIVERSITY OF LA VERNE

With over 30 years of exemplary legal experience and recognition in the legal community, Hafif-Stonehouse Law Group, APLC, maintains an established team of attorneys, paralegals, secretarial, legal research support and writing professionals who are readily available to aggressively handle your case.